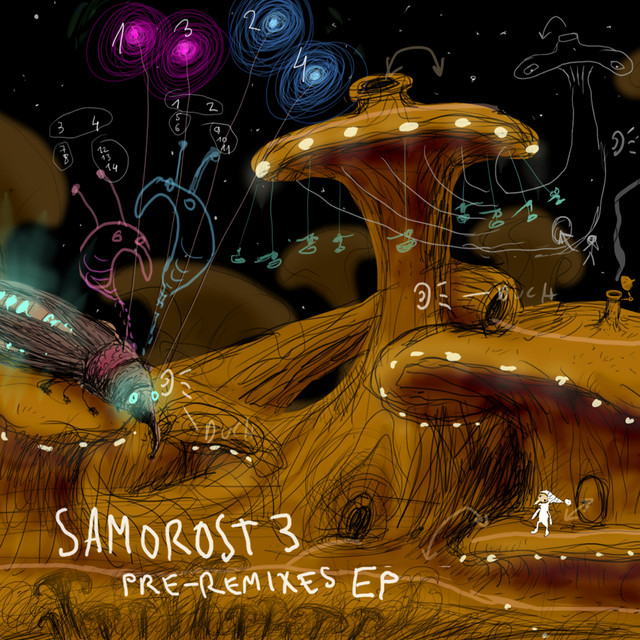 “Samorost3 Pre-Remixes” is small EP with the remixes released before the actual soundtrack and the game, hence the 'pre-remixes'.   Released June 16th,  2015.

The EP opens with “Prenatal Hunters”. This is a slightly revised version of the very ambient chill-out version you will hear in Samorost3. Inspired by a scene in the game, the music comes from the idea of expressing a very primal, ancestral emotion.

The opening song naturally melts into something like a 10-minute Olaf Stuut opus. I fell in love with Olaf's music while playing it in my DJ sets, and thought I might ask him to collaborate on a remix. Luckily he found the track inspiring and delivered a super deep and hypnotizing remix! You should have seen me dancing in the studio when listening to the track for the first time. Pure happiness - I just love his musical world!

Julien and I have known each other for some time. We played at Mira! in Barcelona but missed each other. Later on, we got to chatting about music over the internet, and Julien expressed interest in a collaboration. Actually, it was him who inspired me to do this project. It seemed to be very typical Julien Mier. It’s funny to observe his music assimilated into my musical universe.

Zka4t and Floex - two guys and friends who have shared the story of their music since the early days of the Prague electronic scene. We spent days, weeks, months talking together about music, production, EQs, compressors. I've gone on more of an intuitive musical journey, Zka4t has melted into the sounds. We still have a musical project called “Ema Tomatucha”, at the moment it remains in our imaginations, but anyway... Zka4t is an incredible mind, very creative and precise when it comes to sound and production. Btw, he is also the mixing and mastering engineer of all the recent albums.

Here it comes - the original theme from the Volcanic Vent Planet. The tune is about volcanoes, a wasteland, wind, and crabs. I tried to make this song very retro, and funny as well. Loads of tapes, space echoes, spring reverbs and 60's organs.

Tom Hodge's remix of “Sub-Totemic Arci Code” is another expression of the musical communication between me and Tom as we prepare a collaborative album for early 2016. As always, it shows Tom as a very sensitive soul. I've always adored his almost “Mozartesque” musicality and focus.